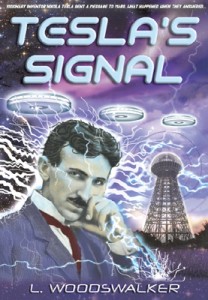 99 cents March 19 – 25
Visionary Inventor Nikola Tesla has a unique affinity for electric current…he can visualize the unseen…he speaks with beings of light. In 1899, he receives a signal from space. When he meets the alien visitors, he finds their agenda not what he had expected. And they require his scientific expertise to further their aims.
Then things start to go wrong–and “mad scientist” Nikola and his brilliant colleague Clara must go on the run from alien captors and human authorities alike. They seek a refuge where they can develop their futuristic defenses against the “Martians”. Nikola must learn to tap into his cosmic abilities and face his own demons: his phobia of germs, touching and love. Eventually they must return to a devastated New York City, where they will face the alien invaders in the final battle for the fate of humanity.
“A classic-style SF novel which blends real history with weird gizmos, far-out space wonder, and hair-raising adventure.”