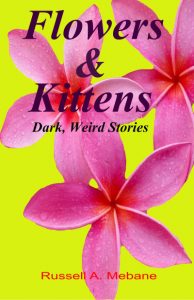 What Inspired You to Write Your Book?
Boredom

How is writing SciFi different from other genres?
It isn’t. You’re just testing the limits of believability. Are tentacle aliens believable? Depends on how you write it. How about a billionaire marrying a coke-head prostitute he’s only known for a week? Depends on how you write it. You’ll notice the last one is the plot for the movie “Pretty Woman”, a sci-fi cult classic. It certainly tested my limits on believability.

How Did You Come up With Your Characters?
They’re all shades of me.

“I would never hurt anyone,” says Maggie Fran. “I’m a vegan.” Maggie’s at home in her small, one bedroom apartment watching her favorite cop show, Stinky Bad Guys. “I don’t eat meat or food products that are cruel to animals,” she tells the television set.

As she sits on her old couch, her cat, Mr. Crazy Head, jumps into her lap. Maggie reflexively pets the feline. The fuzzy gray cat purrs and accepts Maggie’s affection. Petting the cat relaxes Maggie even more as she watches Stinky Bad Guys. Oh! Here comes the best part!

The detective saunters over to the criminal and says, “I knew it was you all along.”

“How did you know?” the criminal asks.

The detective replies, “I can always smell a stinky bad guy.”

“Meow,” says Mr. Crazy Head.
Maggie translates, “Get up and get me some food, woman.” Maggie sighs and follows her feline master’s orders. Her cat reminds her of her boyfriend, Johnny, another bossy carnivore. Maggie grabs a cleaver and hacks off a piece of meat from a slab laying in the kitchen. She cuts up the hunk of flesh into bite-size pieces and disposes of the bones. She puts the fleshy feast into Mr. Crazy Head’s bowl. The cat sniffs the meat and accepts the tribute.

Maggie stares at her cat as it eats. It reminds her so much of Johnny. After a wild night of sex, Johnny just moved in like he owned the place, like he owned Maggie, but the sex was SO great. Maggie looks at her arm. She has a scratch on it from Mr. Crazy Head. The cat was in a bad mood when she tried to pick it up. Mr. Crazy Head scratched her. Johnny does the same kind of thing, only he does more than just scratch.

Maggie moves back to the couch. She almost trips over a bag of trash in the kitchen. That Johnny, Maggie thinks. He forgot to take out the trash again. Still something about the trash bag looks familiar, yet strange. Where did she get that hunk of meat from? Maggie looks down at Mr. Crazy Head happily eating its well-prepared meal. Maggie dismisses the thought and continues her move back to the couch. Another episode of Stinky Bad Guys is starting.

Maggie watches another episode of her favorite show and wonders why Johnny couldn’t get into it. How could he not appreciate the never-ending battle between good and evil? The show’s plots are formulaic, but that’s just to make the show simple and easy to enjoy. So what if all the bad guys have a distinctive smell that the hero can always detect. Realism doesn’t necessarily equal entertainment. Some people enjoy campiness. Sometimes Maggie doesn’t want to think. Sometimes Maggie wants to just sit down and escape from reality. Reality can be cruel sometimes. Why couldn’t Johnny just let her escape?

As the show goes on, Mr. Crazy Head jumps on Maggie’s lap. It purrs as she pets it.

“Oh, you miss Johnny?” she asks the cat, “That’s okay. He’s at work. Y’know, he finally got a job. He’s gonna help take care of us, instead of me doing it all on my own.”

The cat starts to back away from Maggie, as she rambles, “This is probably the greatest show ever aired on television. You should feel privileged to watch this show. If you really loved me, you wouldn’t try to take this show away from me. I do EVERYTHING for you, Johnny, and now you say I can’t even watch my show!”

Maggie catches herself. “Sorry, Mr. Crazy Head. I didn’t mean to yell. I… You’re not Johnny. How could you be? Johnny’s at work. He finally got a job. He’s doing so much better now.”

The cat is hesitant, but comes closer anyway. Maggie examines the cat. Its muzzle looks reddish, but the cat doesn’t appear to be bleeding.

“What have you been doing, Mr. Crazy Head?” she asks the feline.

Maggie gets up from the couch and looks at Mr. Crazy Head’s empty dish. There’s a red fluid around it. A whiff of foul odor tickles her nose and she looks at the trash Johnny forgot to take out. The bag is leaking red fluid and somehow the red fluid got into her cat’s food bowl. Hmm…

“Open up! This is the police!” a baritone shouts through the front door.

“Coming!” Maggie answers, fluttering to the door. She unlocks it and opens the door. “What seems to be the problem, officers?”

The policemen on the other side pause before sniffing the air. They push past Maggie into her home.

Maggie squeals with glee. “Look, Mr. Crazy Head! The cops are here because they smell a bad guy.”

One of the cops steps into the kitchen. “Oh my God!” he exclaims.

The other cop joins him and wretches on the floor.

Maggie comes up beside them. “Oh, that? That’s just the trash my boyfriend left behind. He’s at work right now. He finally got a job. He’s doing much better now.”

The cops point their guns at her. “Hands in the air! NOW!”

Maggie complies as the foul odor returns to her nostrils. “There’s a stinky bad guy here! I smell ‘em! I smell ‘em!”

The cops turn her around and handcuff her.

“What are you doing?” Maggie cries, “There’s a stinky bad guy here.”

The cops turn her around to face the trash in the kitchen.

The cops read her the Miranda rights.

Maggie looks at the meat again. Or is it trash? It’s wearing dirty boxer shorts and Johnny’s old t-shirt. It’s missing a foot. Mr. Crazy Head walks over to it to nibble at the stump. Maggie notices that there’s red fluid splattered all over the kitchen and on her clothes as well.

The cops haul Maggie away, cackling as she goes. The cat takes another nibble from the corpse. Then it leaves, completely uninterested in the problems of humanity.

About the Author:
The author is an Army brat, who was born in Womack Army Hospital, Fort Bragg, North Carolina on October 7th, 1977. He has lived on both coasts of the U.S., but has spent most of his life in the region of the U.S. known as “The South”. Thus if you ask the author where he is from, he will normally respond with either “everywhere” or “the South”.

The author is a Black Christian with socially conservative views, but, overall, has developed a cynical worldview that shows in his work. Through parental prodding the author has also developed pro-Black leanings that were sharpened and strengthened at his alma mater, Fisk University. Much of the author’s initial works were penned there.

Creatively-speaking, the author believes that a writer ultimately pulls from his own experiences and fantasies when writing stories. Thus it is the author’s belief that if one truly wants to understand a person, one should read their work.

This author’s ultimate goal is to inspire thought on the subjects of religion, morality, and race.

Interview with Author – Russell A Mebane