You are here: Home / Space Opera / In strange orbits – volume 1 by Ramon Somoza 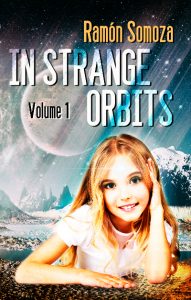 Only ten years old, Tanit is a genius and the youngest astrobiologist in history. For that reason she has been authorized to journey to the newly founded colony of Thuis, fifty light-years from Earth. There she will finally join her mother, who left for the colony two years before. But Tanit has no idea of the terrible events looming in her future that will force her to fend for herself in a hostile universe.
Contains the first five episode of this popular science-fiction series:
1. The lost girl
2. First contact
3. The Krogan’s nest
4. Buyers of the future
5. Rescue in Hell

What Inspired You to Write Your Book?
When traveling in the subway, I heard a couple of girls around 10-12 discuss what they wanted to be when they grew up. It was what you would expect: top model, CEO… but an 11-year old suddenly stated that she wanted to become an astronaut. I found that amusing, as I had never heard a girl talk about having that profession. So I started thinking about writing a story of a woman that had grown up thinking she wanted to become an astronaut and suddenly I thought: "Why not make her an astronaut at HER age?"

How is writing Science Fiction different from other genres?
SciFi is different in the sense that you have to "invent" the future, but this needs to have its own logic. Real SciFi needs to be based on known science, you simply cannot violate universal laws, unless you can provide a good reason for it. Stellar travel as described in this series of books is based on a technology studied by NASA – but the event that causes the original stellar shift has been based on an extension of an astrophysics paper.
Even so, SciFi events need their own logic, in the same way that in a thriller you need to be consistent with the real world. And, if you want to be faithful to the concept of SciFi, you also need to make sure that you do not simply "copy" events in the future and have some fancy gadgets. For example, aliens should behave… differently, not like a bad copy of human beings.

How Did You Come up With Your Characters?
The main character (Tanit) is almost a carbon copy of the girl that inspire me for the book, though I've made her a genius so that she would be able to cope by herself, given that she will be thrown in a lot of bad situations throughout the different episodes. Her future companions (Groar and Tara) were directly inspired from the SciFi game "Mass Effect" and also have some traits from a samurai story I read a long time ago. The Rokuz species was inspired by a French SciFi comic, while the Tloc species were inspired by a photograph of a Mantis.

Book Sample
I point towards space, to a small dot floating over the curvature of Earth.
“I suppose that’s Beta Station, isn’t it? Since it’s at L2…”
Dad laughs.
“That’s correct, my little genius. I guess you’re the only girl who can identify the space stations by the Lagrange points where they’re located.”
I shrug, somewhat uncomfortable by his flattery.
“Daddy, that’s trivial…”
“Not so trivial, young lady,” says the captain from behind me. “Most people on Earth don’t even know what L2 is.” She looks at me, approvingly. “By the way, it’s official now. You don’t have to go in Cryo.”
A start hopping up and down with joy.
“Great!”
The captain smiles. She’s black, very kind, probably quite old. They say that she’s the one who discovered Zeta, already three decades ago. She never talks about that. I imagine that she doesn’t want to remember what happened with the first colony, apparently it was really tough.
“Yes, but it will cost you. You know this ship does not admit passengers. I have convinced Control that, since you’re an astrobiologist, you can help us with the astrophysics instruments, and take care of the secondary IT system.”
My eyes go wide open. That’s far more than I could ever imagine. Some real practice before starting at Thuis…
“That would be great, Laura.”
She takes a cloth insignia from her pocket, and places it on my clothes. It’s the same insignia that all crew members carry.
“Captain for you, auxiliary astronaut Martin. You are now part of the crew.”
I stand at attention, as I have seen that dad does.
“Yes, captain!”
I could have sworn that she laughed, but probably it’s just my imagination because she’s turning towards my father.
“XO, the shuttle is at one hundred clicks. Take over the transfer of the colonists; I’ll be on the bridge.”
My father salutes. I take note of how he does it; from now on, I will have to do that also.
“Yes, ma’am.” He looks in my direction. “Go to the engine room, auxiliary Martin. Report to the chief engineer. I want you to start familiarizing yourself with the astrophysics equipment.”
I repeat his salute, as serious as I can. It’s not daddy who’s talking, it’s the executive officer.
“Yes, sir.”
He responds seriously to my salute and I leave. But I have the impression that those two are crying with laughter.

About the Author:
Ramon Somoza (1956) was born in La Coruña, Spain. He writes since he was 15, when he was living in The Netherlands.
He has an university degree in Computer Sciences, but his experience covers many fields. He has worked as a translator, he has developed software, including simple web applications, desktop or corporate systems and even airborne software (Eurofighter). He has also worked in Manufacturing and Services, as well as the A400M transport Final Assembly Line (FAL). His experience covers data modeling, contract negotiation, program management and even business intelligence and business development. He currently works at Airbus Defence and Space.
Ramón Somoza has also worked in standardization groups dedicated to both software and integrated logistic support aspects. He has participated in at least a dozen of these committees, and has chaired two of them at the Society of Automotive Engineers (SAE) and the European Aerospace and Defence association (ASD). He is currently the European chairman of the ASD/AIA SX000i, Integrated Logistic Support Guide.
Nevertheless, his favorite hobby is writing. Given that he travels a lot, he writes most of his books during his trips. He speaks fluently five languages.