You are here: Home / Alternative History / The Fortune Follies by Catori Sarmiento 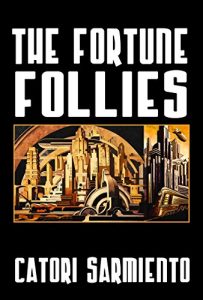 After the end of World War Two, American society is recuperating from the human loss of war, an uneven social system, and a massive corporation that has caused a technological boom. Seeing a new opportunity, Sarah Igarashi departs from her home on the coast of Alaska to meet her cousin in Seattle where she stumbles to find her place in a new city filled with otherworldly technologies and ideals. In contrast is her cousin, Penelope, who is quite comfortable navigating through a rapidly changing society while also pursuing a singing career with the assistance of her uncle and close cousin, George. However, in pursuing their own goals, each family member is met with outward and inward conflicts; from familial deception to social upheaval and natural disasters.

Targeted Age Group:: YA and NA

What Inspired You to Write Your Book?
The Fortune Follies began as a National Novel Writing Month project. Once finished, I decided to keep writing about the world and the characters. Unsatisfied with how it was progressing, I put the manuscript away for several years only to return to it and do a complete rewrite. I was mostly inspired by some interpersonal conflicts I had observed while living in Tokyo and sought to explore through a setting of retro-futuristic imagery that references Japanese steampunk.

How is writing Science Fiction different from other genres?
Alternate History Science Fiction offers a unique challenge in that it reflects partial historical truths while also creating new technologies and settings that feel realistic.

How Did You Come up With Your Characters?
The characters in this book are very loosely inspired by people I knew or met while living in Seattle and Tokyo. I am always intrigued by familial dramatic relationships, so writing about a family and how they interact with each other and a changing society was appealing.

Book Sample
Penny pulls her cousin towards the domed building as the amusements buzz past in swirls
of colors. Inside are blooming greens seen just touching the top. An arboretum of orchids and
heat. Rising tropical trees that perspire just like the ladies in their dresses. Bright pools in glass tanks where brighter fish swim. In the center of the garden, a tall glass column juts up from the base to the ceiling. Sliding up the inside glass is a rusty skinned octopus with thick tentacles, suckers firm, rolling up and across the tank. Penny presses her face close to the glass, oblivious to her cousin becoming ill at ease in the growing crowd. She turns, calling for Sarah, and grabs her by the hand to pull her towards the exhibit, bumping into several passersby to peer into the giant eye, a horizontal black slit surrounded by dusty orange skin. Peering down into a pit of grey sand with natural sea rocks and algae taken from the ocean. A sharp in-take of breath from Penny ends with her quickly announcing that she wants popcorn. Not wanting to follow but also not wanting to get lost, Sarah once again joins her cousin while frustration burns in her chest to returning to the bright outdoors where seagulls drift overhead. From the white washed sidewalks rolls an unassuming black marble that Sarah suspects is a child’s lost toy having fallen from a pocket.

A short whistle sounds, piercing the ears of each pedestrian whose hands rush to cover
ears as some begin running while others, stupefied, remain with eyes fixed on the object.
Colorful smoke rises upwards and outwards from within the sphere along with whizzes and pops that remind Sarah of fireworks in a nighttime summer. Those who remain cover faces with their hands, shirt hems brought up to shield noses and expose bellies, or handkerchiefs held tightly against skin in a kaleidoscope of patterns. A rough tug on the back of her waistline that nearly topples her over is followed by a sharp grip on her forearm from an overly calm woman. In the haze, Sarah’s eyes water to blur the daylight into streams of whites and yellows.
Overcome by instinct, Sarah wriggles free from Penny’s grip to run. Every muscle shouts
at her to run. In the struggle of Sarah wringing to free her hand and Penny fighting, cursing at
her, to hold on, she manages to throw her sleek frame against her cousin, causing them both to fall to the ground with Sarah hitting the back of her skull against a wall. Sarah breathes raggedly.
Her vision worse, burning, she tries shaking her head to focus. Already steady, Penny waves
about a pink and purple kerchief all the while speaking and yet her words are muffled. Frustrated at her cousin’s unresponsiveness, Penny shoves the cloth onto her cousin’s face and ties the ends behind her head to cover her face from the bridge of her nose to her chin. Waiting, alert, Penny crouches over Sarah with on hand pressing firmly on her collarbone. The smoke lifts thickly in the air, traveling on the breeze to spread in a frightening rainbow. Padding footsteps arrive with a strong billow. Penny straightens. Booming out are several figures all with faces covered by white scarves with three intertwining letter Vs printed on the front. Each hold a knife. Spotting the two young women, they point and in a moment saunter towards them.
The ensuing eruption is a tempest and the desire to run pummels against the refusal of her
body to move. In the smoke and with her unfocused vision, Sarah finds it difficult to decipher
where Penny stands. Crackling pops and red flashes are followed by hollers coming from
masculine voices that rise over the whistling still emitting from the marble. When Penny returns, her breathing strained, her skin and hair are dusted with color. Her dress, a pristine powder blue earlier that day, is now a mousy grey. Though visibly distraught, Penny stubbornly remains by
Sarah, gripping her arm to keep her still. Both are silent in the mayhem, leaving Sarah to linger on each frantic thought whirling in her mind. Foremost among them is the alarm to escape, to remove herself from the imminent danger. Yet, each time she jerks away, Penny holds on tighter.

About the Author:
After growing up in the Pacific Northwest, Catori Sarmiento’s travels while being a military spouse have often inspired her unique writing style. Although she began writing at an early age, it was not until she began writing poetry during her time as a University of Maryland student that she decided to seriously pursue professional writing. She went on to study writing in a graduate program at National University of San Diego while also living in Tokyo, Japan. Upon graduation, she began writing what would become a first place Cygnus Award winning novel, The Fortune Follies. A year later, her next novel, Carnival Panic was published.

She hopes that readers will find intrigue and entertainment in her stories!