You are here: Home / Science Fiction / The Last Plague by Stan Loveday 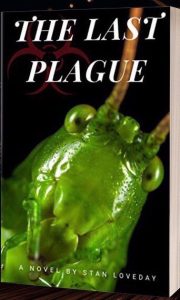 A rogue scientist is forced to find the next designer drug. He plays with fire by modifying the DNA of plants to try and create the ultimate drug. What he doesn’t know it that he unwittingly releases a virus that strikes at the very heart of man and threatens to doom all of mankind.
Is this the sunset of man? Can they survive the onslaught?

What Inspired You to Write Your Book?
Having worked for EMS for over thirty years, The stories about the effects on people that were driven by different conditions evolved into this story line. So many books start after everything has hit the proverbial fan, but so many books don’t paint the human interactions as things lead to that event.

How is writing Science Fiction different from other genres?
You need to make the storyline believable. If you don’t maintain some semblance of reality, the impact of the story doesn’t hook your reader and keep them interested.

How Did You Come up With Your Characters?
Many of the characters are people I have met in real life. Names changed but that attitudes and mentalities are the same.

Book Sample
…
Over in the PD dispatch center, the same scene played out. James had been at dispatch for just over twenty minutes when he acknowledged the arrival of a PD unit on scene near the waterfront. He had just logged the unit on scene as investigating when a frantic voice nearly shattered his eardrums.
“10-33! 10-33! Officer down, officer down! Flagler and 2nd Avenue.” The voice was screaming over the airways as James turned the volume down a touch. Before he was even able to key up his mic to reply, the voice continued, “SHOTS FIRED! SHOTS FIRED!” The computer showed the PD unit as 412.
She had heard enough. The buzzing in her headphones was more than she could take. Pulling the plug on the console, she leaned back in her chair and closed her eyes for a moment.
Suddenly someone was spinning her chair around. She opened her eyes and was staring up at the fat face of that idiot dispatcher Dawn. Her head was screaming out in pain, and all she could see was her finger stabbing at her face.
The motions of her mouth was choppy, almost as if she was barking at her. Tiny drops of spittle were flying from her mouth, speckling her glasses. The veins on her neck bulging out.
And that finger. She jabbed it at her chest once, and then twice. The roar of noise in her ears caused her to tilt her head side to side as if to release a kink in it.
And then the finger jabbed her again. That's it! She had it with that fat cow. She reached out at lightning speed and snatched her hand up.
That finger. She would make it so that bitch would never jab someone with that finger again. As if her motions were done in slow motion, she opened her mouth to scream and shoved the extended finger straight inside her mouth. With the speed of a steel trap, she clamped down hard on that digit.
As her teeth bit down, the expression on Dawn’s face changed from anger to panic, then to sheer terror. The spurting of blood that flowed out of Dana’s mouth sprayed forward with her every growl and grunt.
The noise of her teeth crushing bone was the next noise that hit her. Why was that bitch still screaming at her? She started this argument as the only thing that passed through her mind. Her actions had felt more automatic than on autopilot.
As as suddenly as she had snatched her hand up, she released Dawn’s wrist. The now pale woman fell backwards, her hand spraying blood about the room. That short stump of an index finger quivered and swayed.
Smiling, Dana spat the mini hotdog shaped object straight into Dawn’s face. Turning to look around the room, she failed the see the chair before they struck her across the back of the head.
Collapsing onto the floor, a second fight was breaking out somewhere down in the hallway. Dana never heard the end of it as she had drifted off into unconsciousness by the impact.
Quiet. It was finally quiet in her head.
…

About the Author:
As a retired Firefighter/Paramedic, Stan Loveday lives aboard an aging sailboat in the Florida keys. Author of “Dark Wave” and the new novel “Fireman Down”. With over 35 years’ of experience, he now travels aboard his sailboat ‘SE of Disorder‘. An experienced sailor with thousands of sea miles under his keel, he brings real life experiences to the pages of his works. When not traveling the Caribbean, he resides on the waters of Key West, Florida.

“My writing is drawn on real life experiences to immerse the reader into the novel and feel the terror of when things go south. All that is lacking is the feel of salt water as it hits your face.”