You are here: Home / YA - Science Fiction / War and Money: Book One by Sofia Diana Gabel 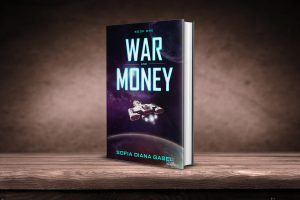 A thrill-packed action-adventure in the year 2187. Earth is a world where war equals money and parents are coerced into providing a constant supply of children for the ongoing alien wars. At the age of fifteen, kids are assigned a career or advanced into the Global Forces and a family with only one child is frowned upon. Fifteen-year-old Daxella Rose Orwan, is one of those ‘only children’, and of a low status. She hates the idea of unending wars with alien species she knows nothing about, but her outspoken nature gets her classified as a ‘non-conformist’, a damning designator, which earns her advancement as a soldier placed under gruff Commander Viteri. Being low status, Dax realizes that her family will be in dire straits if she doesn’t bring in a decent income, which an advancement will do. She soon finds that the Commander has an ulterior motive for placing her into his training camp; to stop her asking questions about the wars and putting ideas into people’s heads.

Dumped into the Anti-Foe Ground Forces, the AFGFs, the sacrificial squadron, Dax at first accepts her fate, but, being a non-conformist, she soon refuses to accept her condition. The Commander plans for her to die in a gruesome display at the hands of the alien enemy to encourage parents to continue sending their children to war to fight the evil aliens. Now Dax has to find a way to survive and stay alive long enough to expose the truth about the wars and those who benefit from them. Plus, she has to protect her new squad who have quickly become her friends. That’s a lot to take on for a fifteen-year old.

What Inspired You to Write Your Book?
I love science fiction and dislike how wars are designed to generate money for everyone but the soldiers, so imagined a future where this became an extreme example. My hero, Dax, is how I would imagine myself to be in a situation like hers. She doesn't accept the status quo and will stop at nothing to expose the truth.

How is writing Science Fiction different from other genres?
I get to imagine a future world, in this case, and develop characters who are similar to those in the current timeline, but changed enough to make the passage of time realistic. When dealing with a future Earth, it's fun to create a different world with interesting weapons, spaceships, and behaviors.

How Did You Come up With Your Characters?
Dax is a bit like me, so I drew upon myself for her development. The other characters evolved from people I know or purely from my imagination!

About the Author:
I'm a multi-genre author and have been writing for as long as I can remember, but I have probably spent the most time concentrating and working on the craft of writing for about the last 10 years or so.

I was born in Sydney, Australia and now live in California in the United States. I have two undergraduate degrees in archaeology and environmental resource management (wildlife biology) and a master's degree in public archaeology. I even took criminal justice and forensics classes to help with my writing so I could understand procedures better. We can never learn too much, right?

In addition to writing, I absolutely adore traveling. I'm definitely a wanderer at heart and find it hard to settle in one place for long. And why should I? There are so many places to explore!